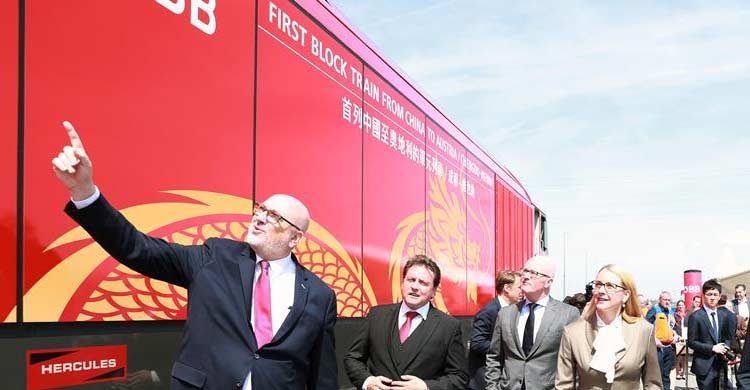 Gao Baolu, a railway worker in an overcoat at Alashankou stood in bitter wind and directed a Duisburg-bound freight train to head off for the China-Kazakhstan border.

With 41 containers of electronic products, motorcycles and cars aboard, the train had run about 30 hours to reach Alashankou, a border port in northwest China's Xinjiang Uygur Autonomous Region. It set off at Tuanjiecun station in the southwestern Chongqing municipality.

Ten hours after this train left Alashankou, another train which departed from Duisburg, Germany pulled in with kitchen, bath and electronic accessories aboard. In Alashankou, containers on a train were reloaded to a separate train on the railway system of the other country.

"I am informed of each driving task via a short message on my phone." At the start, he received such a message every few weeks. Currently, he is much busier as a maximum of six trains leave Tuanjiecun per day. "Last year, almost all of my driving work was on this route."

Boosted by the Belt and Road Initiative, the number of China-Europe freight trains skyrocketed to 6,300 in 2018 from 17 in 2011. Forty-eight Chinese cities have launched 65 freight train routes, reaching 14 countries and more than 40 cities in Europe.

Today's efficient trains have replaced the fleets of camels transporting goods on the ancient Silk Road routes, bringing new wealth to people in Europe and Asia.

"Last year, we had more inbound trains than outbound ones," Qi Dan, general manager of Yuxinou (Chongqing) Logistics Co. Ltd. spoke about a significant change on the cross-border freight train service. Last year, the route had 714 outbound trains and 728 inbound. This trend continued in the first quarter this year.

"This shows a balanced trade and good interaction between Chongqing and Europe," he said.

The Belt and Road initiative helps expand the influence of the China-Europe freight train service. Akos Kovacs, general manager of Ekol Logistics Hungary Ltd., visited Chongqing in late March, the third time in two years for him to to seek such cooperation.

"If we build a distribution center in Budapest, more commodities from the European market can enter the Chinese market and vice versa," Kovacs told Xinhua during his visit to Yuxinou (Chongqing) Logistics.

Southeast Asian countries also enjoy the dividends of the China-Europe freight trains, especially after Chongqing launched the China-Singapore rail-sea transit route in 2017. The New International Land-Sea Trade Corridor is a trade and logistics passage under the framework of the China-Singapore (Chongqing) Demonstration Initiative on Strategic Connectivity.

In April last year, electronic products from Vietnam reached Chongqing through the land-sea trade corridor and then were transported to Europe aboard a Yuxinou freight train.

"It was the first time for Chongqing to realize the international logistics transfer via the rail-sea transport and the connectivity of the two major international freight routes," said Han Baochang, director general of the China-Singapore (Chongqing) Demonstration Initiative on Strategic Connectivity Administrative Bureau.

The new land-sea trade corridor also means the connection of the Silk Road Economic Belt and the 21st-Century Maritime Silk Road, Han said. With its ports, Chongqing in upper Yangtze also connects the Belt and Road with the Yangtze economic belt.

So far, freight trains have made more than 800 trips along this new land-sea corridor, with goods coming and going to 180 ports in about 70 countries and regions.