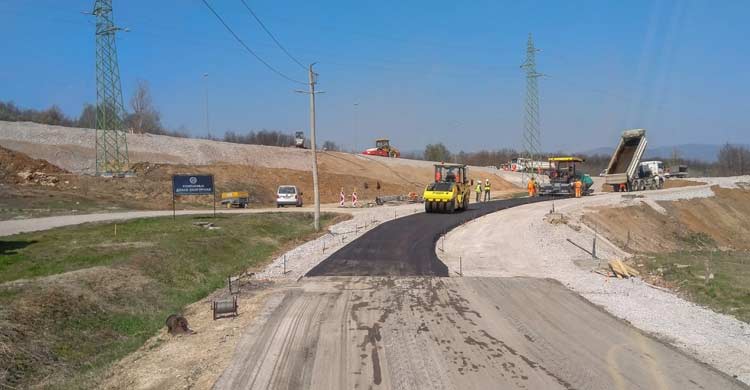 Cooperation with China in the field of infrastructure development is vital for the expansion of Serbia's transit capacities and for the country to become a regional transport hub, said Serbian Minister of Construction, Transport and Infrastructure Zorana Mihajlovic on Wednesday.

She made the remarks while visiting the Belgrade Bypass motorway construction site contracted by the Power Construction Corporation of China (PowerChina).

Touring the construction site with Chinese Ambassador Chen Bo, Mihajlovic praised the progress of PowerChina and its sub-contractor Azvirt from Azerbaijan on the 20.4-kilometer Segment B of the Belgrade Bypass that is worth 207 million euros (231.9 million U.S. dollars).

"Our plan is for the same companies -- PowerChina and Azvirt -- to start construction work on Segment C, and I am very satisfied with all our achievements in infrastructure with China," she said.

Mihajlovic, who is also deputy prime minister, recalled that Serbia had signed a memorandum with China on the construction of Segment C of the Belgrade Bypass, and will apply for a loan with the Export-Import Bank of China by June this year.

Belgrade Bypass, with eight bridges and four tunnels remaining to be constructed, will help divert the existing volume of 15,500 cars and 2,000 trucks travelling through the city per hour, making transit through the Serbian capital less difficult. Compared with 2014, the number of cars using Serbia's highway corridors has increased by 25-30 million annually.

Mihajlovic said that Serbia had also signed an agreement with China for the reconstruction of the Novi Sad-Subotica segment of the Belgrade-Budapest railway line to the tune of one billion euros. Construction should start this year, once the agreement gets the approval from the country's parliament.

Moreover, on May 17, construction is scheduled to begin at the Preljina-Pozega segment of Serbia's new E763 highway built by the China Communication Construction Company.

Infrastructure development has so far been the most visible proof of cooperation between Serbia and China, resulting in numerous mutually beneficial projects, said the Chinese ambassador.

"We have already achieved great, visible results in the area of infrastructure in the mutual interests of economic development of both Serbia and China," Chen noted, assuring that cooperation will grow even stronger in the future.